What is Aldersgate? And where does the name come from?

The history of the name for Aldersgate Centre can be traced across the globe, and originally was an actual gate in the ancient London Wall – one of the four original gates constructed by the Romans in the 2nd or 3rd centuries. The link begins when the gate gave its name to Aldersgate Street, which runs north from the site of the former gate towards Clerkenwell.

It turned out to be an eventful street with a fantastic (ecumenical) history, just a few of its highlights include:

Most importantly for Methodists, it was also the location of a Moravian Chapel, where on 24 May 1738 the Anglican priest (and founder of Methodism), John Wesley, underwent a profound religious experience. According to his journal, Wesley reluctantly and with a heavy heart attended a group meeting that evening in the Moravian Chapel, after his enthusiastic gospel message had been rejected by his Anglican brothers. It was there, while someone was reading from Martin Luther’s Preface to the Epistle to the Romans, that he felt that his heart was “strangely warmed”. New Zealander, Shirley Murray’s hymn “How small a spark has lit a living fire!” celebrates Wesley’s Aldersgate experience and was written in 1988 for the 250th anniversary of the event.

In 1739, the year following his experience on Aldersgate Street, Wesley founded the Methodist Society of England. The nearby Foundery, where Wesley started his work in London in 1739 was originally the first London factory for casting brass cannon for the British Board of Ordnance. It served as the first Wesleyan Methodist place of worship and meeting place, and base for a free dispensary, an apothecary, a surgeon and free school, a credit society and an adjacent almshouse for the poor.

The initial Aldersgate centre in Christchurch grew out of an idea for a Centenary project of the Durham Street Methodist Church in 1964. At the opening of the first Aldersgate centre on this site in 1967, the then President of the Methodist Church in New Zealand, Rev Ashleigh K Petch (who had also been a minister at Durham Street Church , when the project was first proposed) described John Wesley’s Aldersgate religious experience as transforming him from a man wallowing in self concern, into a person fired with God’s concern for a needy world. Petch continued:

“The church had too often given the impression to the world that God was its own private possession, who was there to care for the well dressed, respectable people but unconcerned with the needs of this outside the church…. The new building is a challenge to church people to rethink their attitudes to the world.” 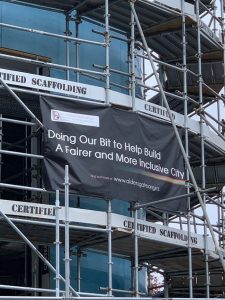 Following the tragic earthquakes of 2010 and 2011, we were committed to discerning how to be a ‘servant church’ to the city of Christchurch and beyond in a new era. Once the small group of faithful folk took on the courageous decision to build an ambitious new inner-city centre for faith and social justice, it didn’t take us long to decide to keep the name, Aldersgate, as an on-going challenge. We hope it will be a spirited gathering place, open for all – and especially offering a place to stand for those disparaged or marginalised.

Click here for more information about te reo name and strap-line given to the new building.